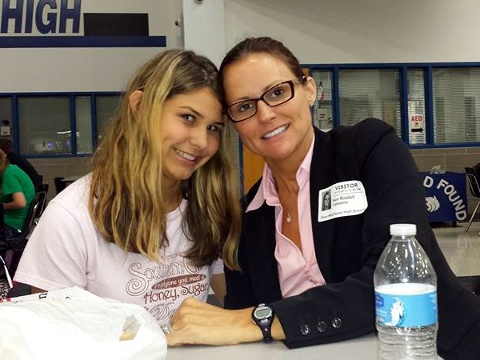 “Shea should just have one of her seizures and die.”  Shea Shawhan, an 18-year-old high school student, recently received this anonymous text.  She has the mental capacity of an eight-year-old, as the result of a brain injury she suffered at birth.  Nonetheless, she plays softball and is a cheerleader.

Another text she has received: “Why are u still here. Clearly no one wants you. U only have special needs friends. And ur ugly and have a horrible fashion sense. Honestly ur clothes suck.”  Others are even more explicit and disgusting.  They are sent from fake phone numbers generated by Internet applications that hide the senders’ identity.  Shea’s mother has changed her daughter’s phone number and blocked the fake numbers, but the texts have continued.

The good news is that an enormous groundswell of support for Shea has erupted since these texts have been made public.  A Facebook page, “Imwithshea,” has been created to support her.  The day after the story first broke, she gained 19,000 Twitter followers in 24 hours.  At a recent football game, family and friends wore “I’m With Shea” t-shirts.

Tragically, Rebecca Sedwick did not receive such support.  Rebecca committed suicide last month after being bullied; she would have turned 13 this weekend.  Two girls, one 14 and the other 12 years old, have now been charged with aggravated stalking.  The sheriff who arrested the girls says he would arrest their parents if he could.  His message to parents everywhere: “Watch what your children do online.  Pay attention.  Quit being their best friend and be their best parent.  That’s important.”

October is “National Bullying Prevention Month,” an emphasis our culture sorely needs to embrace.  Do you have children in your home?  If so, I recommend that you read this article and make yourself aware of apps that are being used for bullying and other secretive behaviors.

The director of the National Bullying Prevention Center is right: “The culture of bullying won’t end until people across the country take action and show kids that they care.”  Most of all, they need to know that God cares.  He loves each of us unconditionally.  He considered our eternal life worth the death of his Son.  He knows our temptations (Hebrews 4:15), grieves our pain (John 11:35), and holds us in his hand forever (John 10:29).

How does Shea Shawhan feel about being bullied?  “I won’t let anyone tell me what I can and can’t do.  I will not let people bully me.  I am strong.  I have a disability but that doesn’t mean I’m not smart.  I am perfect, I am me and that is awesome.”