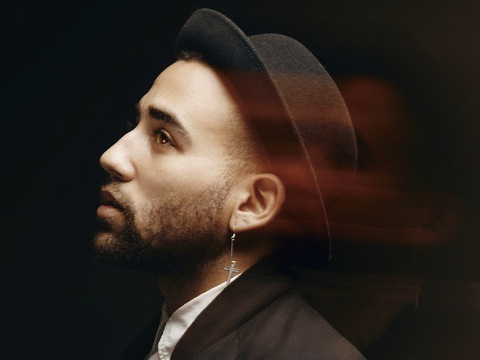 Parson James is quickly becoming one of the more talked about new artists after he coupled his debut EP with appearances on several Late Night shows, including “The Tonight Show” with Jimmy Fallon. James describes his music as “conflicted pop gospel” a description that appears  an apt summation given many of the lyrics in his songs. To truly understand where the angst, pain, and resolve in songs like “Sinner Like You” and “Temple” originate, we first have to understand a bit more about his past.

Parson James grew up in Cheraw, SC, which he described as “a small, 5,000 person town, very religious . . . The town is just church, football, and buffets.” However, it was also a town dominated by racism on both sides of the racial divide; a reality that proved especially confusing for James considering his mother is white and his father is black. As he characterized the people in his town, “They were all fueled with hate, but they were all Bible thumpers, and always in church, but talking [mess] about everyone.”

That hypocrisy has been all the more difficult to move past because, for him, the message of hate goes beyond the misguided bigots that populated the pews in his hometown. In addition to the questions and inner-conflict related to his bi-racial heritage, James also grew up as a homosexual. And while he didn’t fully embrace that orientation until he moved to New York, it has since become one of the defining aspects of his identity. He believes that he is damned as a result, a notion that family members outside of his mother have largely reinforced. Consequently, he “can’t process the Bible and say I can go to church and feel comfortable there because, regardless of what anyone says, that word does say that man can’t live with a man. And it’s an abomination. I don’t feel like an abomination.”

The thing is though, James doesn’t want people to pretend that the Bible doesn’t condemn homosexual activity. Rather, he hopes that you will “open your eyes and see that I’m just a sinner like you.” What he longs for is an acceptance born from the realization that we are all flawed people and that desire drives much of his music.

James’s belief that he cannot be saved because he is gay is tragically flawed, because  the Bible condemns not the orientation but the act, which is also not grounds for irreversible damnation considering Paul states that many of the believers in Corinth used to practice that sin (1 Corinthians 6:9–10). Moreover, there is no sin that can separate us from God other than our unwillingness to accept his offer of salvation (Matthew 12:31).

That said, James’s request that we not judge the sins of others because we are all sinners is also flawed. However, the manner in which we go about recognizing such sins is of the utmost importance.

James’s assertion that none of us is perfect is absolutely correct and must be the starting point for any judgment we issue (Matthew 7:3–5). Moreover, we must also be clear that there is a fundamental distinction between the sin and the sinner. God loves the latter, but that love requires him to always abhor the sins that he knows are so destructive in our lives. As a result, he will never stop calling us to a more perfect life and has tasked us with holding each other accountable in that regard.

Unfortunately, in reading about his background it seems clear that James seldom, if ever, encountered that sort of correction from the people in his church. I can’t help but wonder what kind of difference it would have made if they had reminded him that, while acting on a homosexual orientation is “an abomination,” he is not.

God sees us as so much more than the sum of our sins, but far too often we don’t view those around us in that same light. If we truly want to help people come to a saving knowledge of God’s grace, that hypocrisy has to stop. It’s one of the primary reasons that Parson James feels as though he has no place in God’s kingdom when, really, he is just a sinner like us. Let’s not make the same mistake with the people God places in our lives today.