Believe Me: a movie review

Believe Me: a movie review 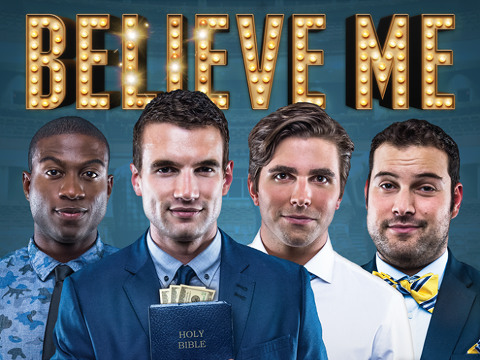 “Why do people go to charity events?” he asks. “They want to feel like they’re helping people, and that feeling comes with a price. The sadder the cause, the higher the price . . . Sometimes people do want to be lied to,” he justifies.

The comrades create a scheme they call Project Get Wells Soon, and to their surprise a Christian fundraising tour chooses their faux charity to travel cross-country, preach the gospel, and help solicit funds. Hilarity ensues and stakes rise as they lie, steal, and pretend to be faithful followers of Christ.  The movie pokes fun at Christian sub-culture, but does so in a way most Christians will laugh along.

As Sam and his friends delve deeper into Christian culture, they must learn how to act, speak, and look like Christians. They teach each other prayer lingo and dip their Bibles in a swimming pool to make them look well used.  They also create a kitschy Christian clothing line called “Cross Dressing.”

Writer and director, Will Bakke, says, “We don’t hold back on the struggles of faith, no matter which side of the fence you’re on. It takes as much faith to not believe in God as it does to believe in Him. I hope people will feel that we were fair to both sides of the discussion.”

Bakke and the Riot Studios team want to be clear that “Believe Me” is not only for Christians. “Christianity is the backdrop to the story, but there’s no hidden agenda or altar call at the end of it,” Bakke explains. “We believe this story is all about the idea of truth which is an universal theme which we’re very excited about because it doesn’t matter really where you’re coming from on the line of faith whether you’re for it, against it, whether you have it, whether you’re a part of a religious culture or not. Anyone can walk into this movie and get it and really understand the desire that we’re going after.”

In Mere Christianity, C. S. Lewis describes the pitfall of many artistic endeavors. “You will never make a good impression on other people until you stop thinking about what sort of impression you are making. Even in literature and art, no man who bothers about originality will ever be original: whereas if you simply try to tell the truth (without caring two pence how often it has been told before) you will, nine times out of ten, become original without ever having noticed it.”

“Believe Me” avoids the temptation to force the story into a neatly wrapped gospel package. Instead, the gospel is artfully woven throughout the storyline.

Go see it yourself and take some friends along for some gut-wrenching laughter—and a dose of truth as well.