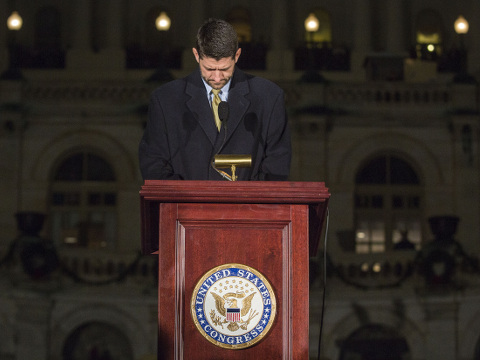 Yesterday morning, Syed Rizwan Farook and his wife, Tashfeen Malik, left their six-month-old daughter with Mr. Farook’s mother. According to today’s New York Times, the couple explained that they had a doctor’s appointment. Then they carried out a shooting rampage at the Inland Regional Services in San Bernardino, California. Fourteen were killed, and seventeen more were injured.

At this hour, police are trying to determine the motive for the massacre. Farook worked for the county health department, which was hosting a holiday party at the facility. He attended the party and then stormed away angrily. He and his wife returned wearing masks and vests, and started shooting. They were later killed in a gunfight with police. Farook’s brother-in-law told reporters, “I have no idea why he would do something like this. I have absolutely no idea.”

San Bernardino is a city of more than 200,000, an hour’s drive east of Los Angeles. Before yesterday, it was primarily known as the location of the first McDonald’s restaurant. Now it will forever be tied to yet another mass shooting.

But with this difference: when political leaders responded to the tragedy by tweeting promises of prayer, skeptics quickly pounced. The New York Daily News published the giant headline, “GOD ISN’T FIXING THIS” and the subhead, “As latest batch of innocent Americans are left lying in pools of blood, cowards who could truly end gun scourge continue to hide behind meaningless platitudes.” The Nation and Huffington Post made similar allegations.

The Atlantic‘s Emma Green described their reaction as “prayer shaming.” She comments perceptively: “This cynicism offers a view into just how much religion and politics have changed in the United States. Prayer and political action have a deeply entwined history in America. From civil rights to women’s suffrage, nearly every social-justice movement has had strong supporters from religious communities—U.S. history is littered with images like the one of pastors and rabbis marching on Selma, side by side with political activists.”

In coming days, we’ll hear many explanations for mass shootings in America. Gun ownership, a quest for fame, mental health issues, violent video games, the breakdown of the family, and glorification of mass killers by the media will all be blamed. And undoubtedly more skeptics will berate calls to prayer.

Such critics separate what the Bible connects. Some of the greatest prayer warriors in Scripture and Christian history were also some of the most effective agents for change. Paul was a man of intercession (Ephesians 3:14) whose work changed human history. Martin Luther prayed for hours each morning and sparked the Protestant Reformation. Mother Teresa was passionate about prayer and about loving the poor. Jesus spent hours in prayer before he fed multitudes, healed the sick, and died for our sins.

Perhaps “prayer shamers” might consider that praying for wisdom is essential to effective action. And that praying for courage is vital to righteous response. And that when we “pray without ceasing” (1 Thessalonians 5:17) for our fallen, broken culture, we position ourselves to be transformed by the power of God.

When Terry Petit’s daughter was hiding from the shooters yesterday morning, she texted her father: “People shot. In the office waiting for cops. Pray for us.” After workers were evacuated from the Inland Regional Center, many bowed their heads, held hands, and prayed.