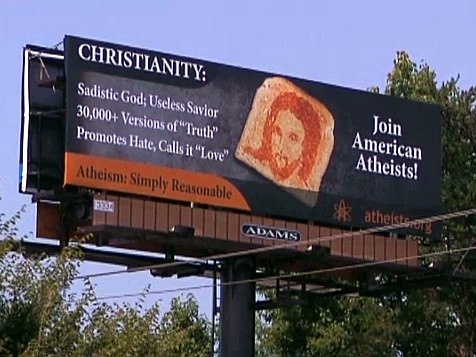 Is God “sadistic”?  Is Jesus “useless”?  Do Mormons believe God to be a “space alien”?  Is atheism, by contrast, “simply reasonable”?  These are the assertions made by an American Atheists’ billboard campaign aimed at the Democratic National Convention in Charlotte, North Carolina.  They would have been shown to the Republican National Convention delegates as well, but no one in Tampa would rent the group billboard space.

When the billboards went up last month, response was swift.  A Jesuit priest pointed out that the anti-Christian billboard “makes the most common high-school error when it comes to atheism.  It’s not arguing against the existence of God, but against religion.  The American Atheists need to go back to school on this one.”  In response to the atheists’ claim that God “promotes hate,” he stated that the group is “doing a bang-up job themselves with that billboard.”

A Mormon professor called the campaign “petty and vindictive” and said of the billboards, “If this example of adolescent silliness is what atheists mean by being reasonable, then neither Mormons nor other Christians have much to worry about.  When atheists organize to serve the poor and needy of the world, they will be taken more seriously.”

Two weeks after they went up, the billboards in Charlotte came back down.  Not because American Atheists repented of their slander and illogic.  Rather, the group removed their billboards because “our fellow citizens have responded with vitriol, threats and hate speech against our staff, volunteers and Adams Outdoor Advertising.”

Non-atheists have not cornered that market.  A new movement calling itself “Atheism+” has just been launched.  Fellow atheists who criticize the group are called “immoral scum” and labeled with other words I won’t repeat here.

Just as many are frustrated by the “loathing” of the current presidential campaigns, I lament the state of religious rhetoric in our culture.  If believers threatened atheists who posted anti-Christian billboards in Charlotte, they grieved the heart of God.  If atheists resort to irrational insults to make their case, they show they don’t have a reasonable case to make.

Our divisive, negative culture will know we are Christians by our love (John 13:35).  We are most clearly the children of a loving God when we love our enemies and pray for those who persecute us (Matthew 5:44-45).  As I’ve often noted, you can tell if you’re a servant by the way you react when people treat you like one.  When last did you “turn the other cheek” for Jesus?