Blessed is the nation whose God is the Lord - Denison Forum

Blessed is the nation whose God is the Lord 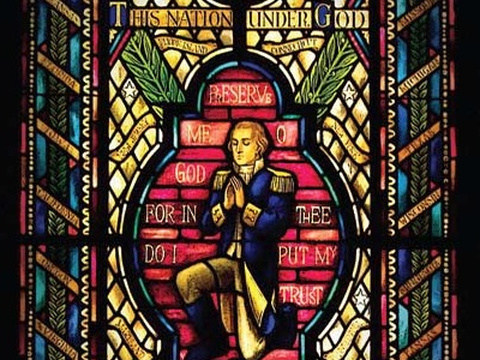 American flags were on display across the nation for Independence Day.  But the flags we so proudly displayed nearly didn’t come to be.  The American flag originally got a new star and stripe every time a state entered the Union.  By 1794 we had 15 stars and stripes—it was a flag with 15 stripes that inspired Francis Scott Key to write the “Star Spangled Banner.”  By 1817 the flag had 20 stars and strips; the Flag Act of 1818 finally decided that the flag would have only 13 stripes, to honor the original 13 colonies.

Other patriotic elements also have interesting stories.  The official vote declaring our independence from Great Britain actually occurred on July 2, 1776, when the Second Continental Congress voted to approve a resolution of independence.  How would they notify King George?  Thomas Jefferson’s Declaration of Independence was revised and finally approved on July 4, after we had declared our independence two days earlier.

Benjamin Franklin wanted our national emblem to be a turkey, because it was domestic, useful, and tasty.  He considered the eagle to be a “bird of bad moral character,” because it is a scavenger that steals from other birds.  Fortunately, he was outvoted by John Adams and Thomas Jefferson, the other members of the committee to name the national symbol.

Fireworks began the very next year, on July 4, 1777.  They were John Adams’ idea, who wrote shortly after the Declaration was signed that the day “ought to be solemnized with pomp and parade, with shows, games, sports, guns, bells, bonfires, and illuminations, from one end of this continent to the other, from this time forward forever more.”  However, it is important to note that he also thought the day “ought to be commemorated as the day of deliverance, by solemn acts of devotion to God Almighty.”

As we reflect on our nation’s independence, let’s explore Adams’ combination of celebration and commemoration, fireworks and faith.  We have sung “God Bless America” often this week.  How can God answer our prayer?  How can he bless America? Psalm 33:12 is the answer: “Blessed is the nation whose God is the Lord.”  What does this statement mean?  How can it apply to us?  How can we be a nation God can bless?

The psalmist wants us to “sing joyfully to the Lord, you righteous” (v. 1).  Note the tense: this is a command to all who are “righteous,” all who are the people of God made right with him by his grace.  It is a present-tense command, requiring us to worship him continually, not just on Sunday; privately, not just publicly.

Why should we give him such praise?  The text calls us to praise God for his word: “The word of the Lord is right and true; he is faithful in all he does” (v. 4).  He keeps all his promises, always.

Praise him for his creative power: “By the word of the Lord were the heavens made, their starry host by the breath of his mouth” (v. 6).  All that we can see was made by the One we cannot see.

Praise him for his providential purpose: “The Lord foils the plans of the nations; he thwarts the purposes of the peoples” (v. 10).  If a nation exists, it does so by his permissive or perfect will—the God of the universe either allowed it or birthed it.  That’s why the psalmist could say that “the plans of the Lord stand firm forever, the purposes of his heart through all generations” (v. 11).

As a result, “Blessed is the nation whose God is the Lord, the people he chose for his inheritance” (v. 12).  When a nation affirms and submits to God’s word, love, power and providence, that nation makes him their Lord.  And that nation is positioned to receive all he intends to give.  That nation is a people God can bless.

Was this Psalm true of America at her founding?  Did we recognize God as our Maker and Lord?  There are many ways to explore that question, but one is to look to the inscriptions found in our national capitol.  They are the most permanent and public statements of our national creeds and beliefs.  What do we find there? The Washington Monument displays on the east face of its capstone the engraving, Laus Deo, “Praise Be To God.”  A Bible was placed in its cornerstone as well.  The Capitol Building has inscribed over the Senate east entrance the words, Annuit Coeptis, “God has favored our undertakings.”  The Great Seal of the United States displays these words as well.

In the House chamber is inscribed the words, “In God We Trust.”  These words are also written over the southern entrance of the Senate chamber and on our money.  All Supreme Court sessions begin with the Courts Marshal’s announcement: “God save the United States and this honorable court.”  Twelve different images of Moses and the Ten Commandments appear throughout the Court.  And the Liberty Bell displays an inscription from Leviticus 25:10: “Proclaim Liberty Throughout All the Land unto All the Inhabitants Thereof.”

Does America still recognize God as the Maker of our nation?  Do we affirm his word, love, power and providence?  Can he still bless us?

God can bless a nation that recognizes him as their Maker from their beginning, and that trusts him as their Deliverer today.  The Psalmist continues: “From heaven the Lord looks down and sees all mankind” (v. 13).  He “watches all who live on earth” (v. 14) and “considers everything they do” (v. 15).  Is he pleased when he looks at America and Americans?

He looks for nations who do not trust in themselves: “No king is saved by the size of his army; no warrior escapes by his great strength.  A horse is a vain hope for deliverance; despite all its great strength it cannot save” (vs. 16-17).  America is the world’s only military superpower, the first nation in history to control every ocean.  Do we trust our power or our Lord?

He looks for nations who trust rather in him: “But the eyes of the Lord are on those who fear him, on those whose hope is in his unfailing love, to deliver them from death and keep them alive in famine” (vs. 18-19).  As we face militant Islam, global economic crisis, and the upcoming election, are we turning to him?

The Psalmist does: “We wait in hope for the Lord; he is our help and our shield.  In him our hearts rejoice, for we trust in his holy name” (vs. 20-21).  Many of the Founders did as well, as inscriptions in our nation’s capital demonstrate.

{source}<iframe style=”float: left; border: 1px solid #000000; background-color: #C0C0C0; padding: 2px; margin: 10px; -moz-border-radius: 3px; -khtml-border-radius: 3px; -webkit-border-radius: 3px; border-radius: 3px;” width=”400″ height=”225″ src=”http://www.youtube.com/embed/abLpuTKRzbA?rel=0″ frameborder=”0″ allowfullscreen></iframe>{/source}In the chapel of the Capitol there is a stained glass window of George Washington praying under the inscription, “This Nation Under God.”  A prayer is inscribed in the window that says, “Preserve me, God, for in Thee do I put my trust.”  The mantel of the fireplace in the President’s Dining Room of the White House displays these words from John Adams: “I pray Heaven to bestow the best of Blessings on this House and all that shall hereafter inhabit it.  May none but honest and wise Men ever rule under this roof.”

The Washington Monument contains 192 memorial stones on the interior walls.  Among them are numerous carved tribute blocks that say: Holiness to the Lord; Search the Scriptures; The memory of the just is blessed; May Heaven to this union continue its beneficence; In God We Trust; and Train up a child in the way he should go, and when he is old, he will not depart from it.

On the Jefferson Memorial, third panel, we find this statement from our third president: “God who gave us life gave us liberty.  Can the liberties of a nation be secure when we have removed a conviction that these liberties are the gift of God?  Indeed I tremble for my country when I reflect that God is just, that His justice cannot sleep forever.”

Does America trust God as our deliverer today?  Are we a nation he can bless?

The 33rd Psalm concludes with this prayer: “May your unfailing love rest upon us, O Lord, even as we put our hope in you” (v. 22).  Would you make these words your intercession for America today?

President James Monroe, in his second Annual Message to Congress, dated November 16, 1818, made this statement:

“When we view the blessings with which our country has been favored, those which we now enjoy, and the means which we possess of handing them down unimpaired to our latest posterity, our attention is irresistibly drawn to the source from whence they flow. Let us then, unite in offering our most grateful acknowledgments for these blessings to the Divine Author of All Good.”