Monica Lewinsky: how to make peace with your past

Monica Lewinsky: how to make peace with your past Monica Lewinsky is making headlines again this morning.  The infamous presidential intern’s affair with Bill Clinton led to his impeachment 15 years ago.  Now an audio tape which she made in November 1997 has surfaced.  The recording was made months after the affair ended.  On it, she tried to convince the president to meet with her again.  The tape was thought to have been destroyed, but the National Enquirer says it has obtained a copy.  The timing of this news is strategic, as Hillary Clinton may be preparing a presidential bid.

Even the President of the United States can’t make the past go away.  Nor can you or I.  Shakespeare advised, “Things without all remedy should be without regard.  What’s done is done.”  If only it were that easy.

What in your past do you hope never sees the light of day again?  You have three options for making peace with it, but only one will work.

One: You can ignore it and hope it never resurfaces.  How did that work out for King David?  Do you really want to carry the burden of your guilt for the rest of your life?

Two: You can punish yourself.  Guilt is the price good people pay for bad deeds.  If God won’t discipline us, we’ll punish ourselves.  We continue to beat ourselves up over mistakes made and failures committed until we feel that we have paid our debt. 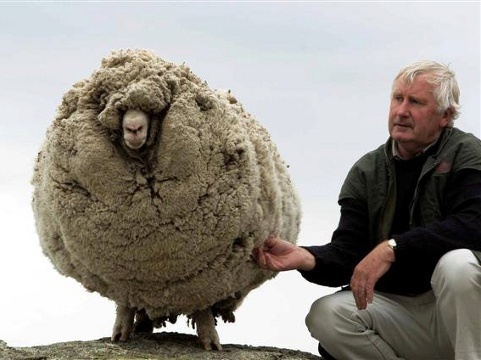 So confess those parts of your past that burden you today, specifically and with a repentant heart.  Claim the fact that God has forgiven and forgotten all you confessed to him.  The next time guilt strikes you, say to it: “I confessed that to God, and grace is greater than guilt.”  You may have to say it 100 times today and 90 times tomorrow, but eventually the grace will defeat the guilt in your soul and you’ll be free.

Shrek was a sheep in New Zealand. He lived by himself for six years, then was caught on April 15, 2004. His fleece had grown to weigh 60 pounds. His shearing was broadcast on national television; it contained enough wool to make suits for 20 men.

Jesus is our “good shepherd” (John 10:11). If we come to him, he will help us “lay aside every weight, and sin which clings so closely” so we can “run with endurance the race that is set before us” (Hebrews 12:1). Your culture sees what you’ve been; God sees what you can be.